So why haven't I posted on my garden and food blog for a full year? Because I've been too busy gardening and preserving. We expanded our vegetable garden last year (to about 2,000 SF) and it has now become a major time hog. With weeding, soil preparation, planting (amid the weather mishaps of the early part of the year) and then staking, spraying (although I limit that to what is absolutely necessary) and compost mulching, the garden can soak up days at a time.

But then the hardest part of all - the harvesting. Surely this ought to be the payoff and time for celebration. But it can lead to a sort of exhaustion, as piles of what a fellow gardener and blogger calls "obligatory vegetables" take over the kitchen and demand to be processed. 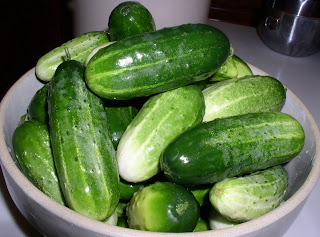 Thus it was in July when I came to resent my cucumbers for being so relentlessly productive. I had a disappointing crop in 2009 (an all-around poor summer for gardening) and was unable to make our favorite bread-and-butter pickles. So this year I planted 4 hills of pickling cucumbers, including two of Ferry-Morse's "Sumter". The other two hills were from old seed, including "Homemade Pickles" from Cook's. ("Amour", last year's choice from Johnny's, was discarded - it has awful prickly spines.) The two from old seed had a modest production, but Sumter exploded.

So of course I made a big batch of the bread-and-butter pickles, but Sumter wasn't done with me. Despair set in as I went out to the garden every other day to find another full flush of fruit ready to pick. 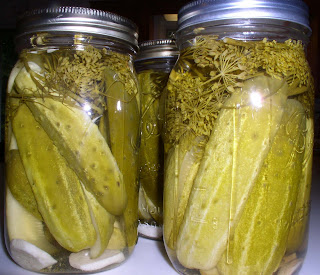 Fortunately I had collected several books on pickling, including the excellent The Joy of Pickling by Linda Ziedrich. Although I had never made dill pickles before, I tried her Short-brined Dill Pickles. Like most pickles, they had to cure on the shelf for a while. But I might have made a second batch if I had tasted them right away. They are wonderful - spicy (contain garlic, hot pepper and peppercorns in addition to dill) and not flabby, though I didn't include grape or cherry leaves. We'll have no trouble eating them up this winter.

Then it seemed that my moment had arrived to try traditional fermented dill pickles (called "half-sours" by Ziedrich). I didn't use her recipe but rather one from Ohio State extension. Those did turn a bit flabby and though they are tasty enough, I won't try that again. They filled up my Gartopf fermenting crock and left an odor that was difficult to clean off.

Since I had already made another pickle (a family favorite, green tomato relish), it was time to stop. Fortunately pickling cucumbers are fine in salad, cold cucumber soup, etc. And less than a month after they began to fruit, I pulled the vines out. They were being afflicted by bacterial wilt disease.

Here is our own recipe for bread-and-butter pickles. Quantities of vegetables are approximate depending on what is available.

Slice (a food processor works well for this) and layer in a 3-gallon pickling crock with 1 cup total of pickling salt. Cover with a weighted plate for about an hour till brine forms (a quart jar filled with water will work). Refrigerate for about 6 hours.

Drain and rinse the vegetables and place into a large pot that contains this pickling mixture: 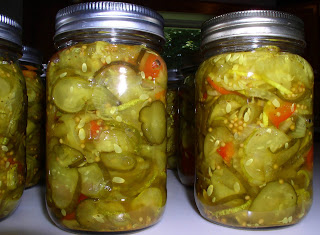 Note: if the vegetables are not rinsed, the pickles will be salty. A couple of washes is enough. Use a colander.

Heat the mixture (but do not boil) until the vegetables turn translucent. Pack into pint jars and process in a boiling water bath for 15 minutes. Allow the pickles to cure for a month before using. This recipe makes approximately 16 pints.

Posted by Vivienne at 1:13 PM No comments: