For languid summer feasts, the best thing is a very simple and luxurious dessert.  This classic freezer ice cream takes almost no time to assemble, and is always eaten in respectful silence.  It requires no special equipment.  Because of the high cream content, there is no crystallization and an ice cream machine is not needed.  Just pour the mix into a cake pan and place into a freezer for a couple of hours. 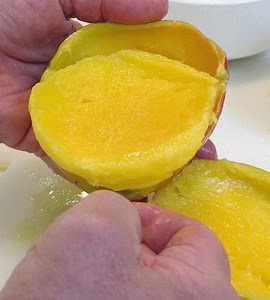 As an additional touch, fresh mango fruit (which is obviously not local to North America, but is frequently fresh and widely available in the late summer) may be sliced and placed on each serving.  I do not advise sugar or any other addition to the fruit.  My husband has published a full description of the method for peeling a mango on his blog, from which this illustration is lifted.

Mix and pour into an 8" square cake pan.  Freeze for a couple of hours, till solid.

This is best eaten on the same day but can be kept frozen for a few days.

It is just as good (and some would say better) when lime is substituted for the lemon.

How Green Was My Pepper 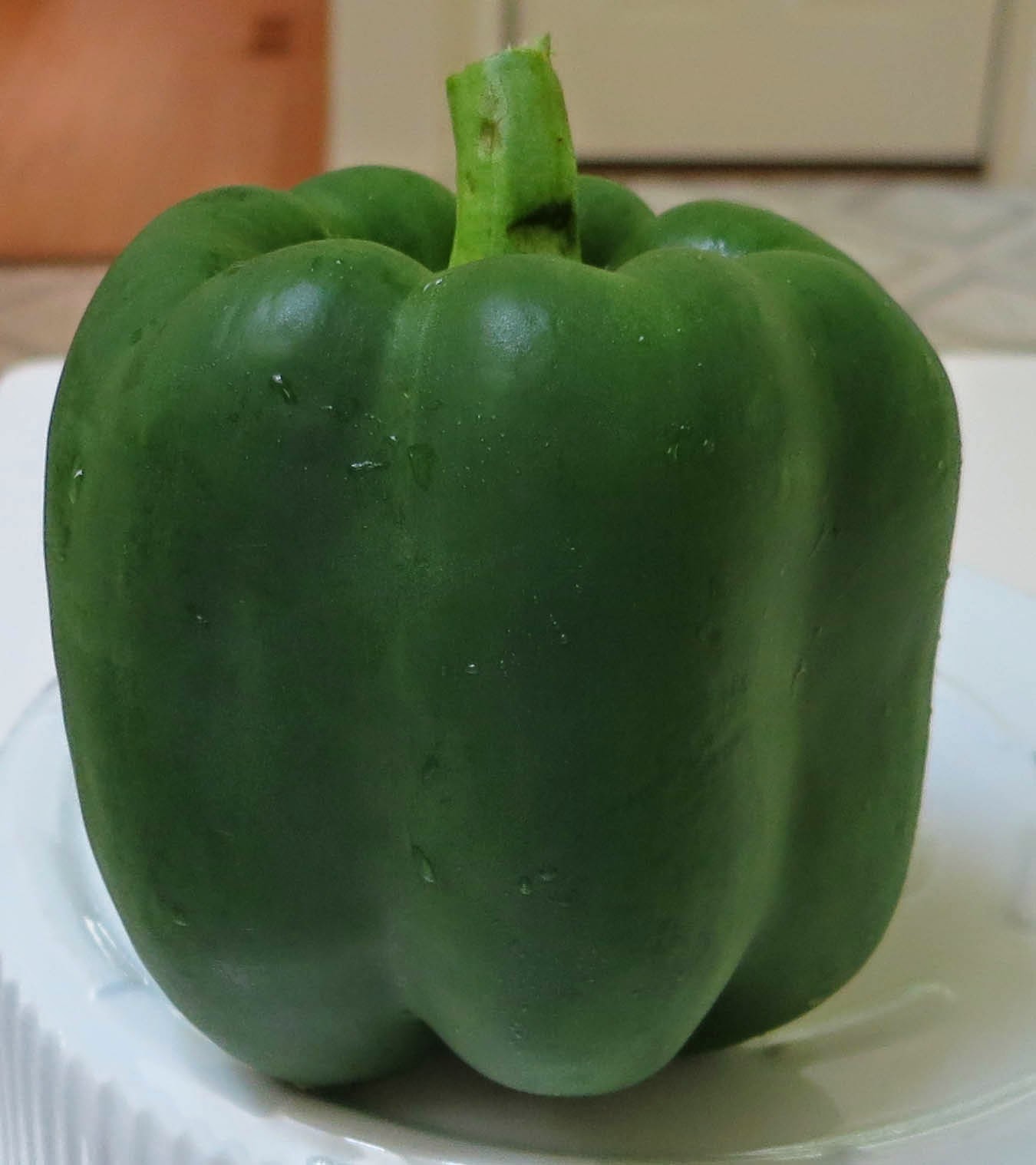 Whether you source your summer vegetables from a CSA, the farmers' market, or your own garden, there comes a time when you are faced with a bumper crop of green bell peppers.  Eventually these big babies will ripen into red sweet peppers, or into another color.  Ripened bells are beloved by most.  I've written several posts on the preparation and use of roasted and peeled red peppers and of course sweet ripe red peppers are appreciated in salads and other dishes.

But as has been acknowledged even by the writers of the New York Times food section, green peppers are another matter.  We think so little of them here that I have often offloaded the end of season bounty on friends and neighbors.

Still, they are what is now.  And they do have some use in selected dishes.  This is the time of year that I pull out an old standby, from a cookbook that is also an old standby.  I received my copy of the I Hate To Cook Book at about the same time as my original copy (1964 edition) of the Joy of Cooking.  While I read Joy cover to cover (it was my first cooking course), I probably made a great many more meals from Hate To Cook over the first several years of my marriage.  There was no stigma in cooking from cans at the time.  (That was the form in which most food was sold.)  Also, I was a student with little time or money for fancy cooking.  The book has now been reissued and its author, Peg Bracken, has now been acknowledged as a figure of cooking history in her own right.  I'm still using some of the recipes from the book.  For one thing, they don't all involve creamed canned soup.  For another thing, they are invariably easy and tasty.

This casserole uses up a whole green pepper!  It goes well with some fresh sautéed vegetables like summer squash and a crisp salad from seasonal greens.  I made mine with a locally produced pork sausage, very sustainable.

Note: the recipe calls for "pork sausage".  You'll want bulk sausage for this.  But bulk sausage comes with various seasonings included.  Mine has sage and crushed red pepper.  If you use unseasoned ground pork instead, the results may vary slightly.

Slightly modified from The I Hate To Cook Book, by Peg Bracken

Using a stove-to-oven pan (enameled cast iron is my choice), crumble and brown 1 pound bulk sausage.  If excessive fat is produced, pour some off.