Since I've been predicting disaster for years, I particularly enjoyed an article in the January 26, 2009 New Yorker discussing "The Dystopians". It describes the people who have made it their career or at least their avocation to tell the rest of us about how bad things are going to get. An outstanding example is the author James Howard Kunstler, who has written such books as The Long Emergency. I only discovered him with this article. Another author mentioned is Nassim Nicholas Taleb, who wrote The Black Swan. That one I read last winter, before our economic system collapsed enough that everyone noticed. As the author of the article (Ben McGrath) notes, these days are great for celebration of "triumphant pessimism".

Now Taleb is getting a major following from newly converted financial professionals. His writing is very hard to follow; he alludes to chaos theory and various statistical models without really explaining any of them. The basic idea is that we fall in love with the current trend and situation and expect that things will go on forever as they are, only maybe getting better and better. His clearest exposition of this is with the story of the turkey who enjoys day after day of plentiful food, water, and sunshine. The turkey confidently predicts that this will go on forever, and his predictions are good - until Thanksgiving Day. This was exactly like our county's budget director who every year presented a budget with ever-increasing totals and the comment, "The best prediction of the future is the past." Now the county has a $10 million deficit and is closing entire departments. Unfortunately, my protests at the time had little effect, and someone once informed me that I was a "contrarian". "I told you so" after the fact is pointless and unsatisfying. 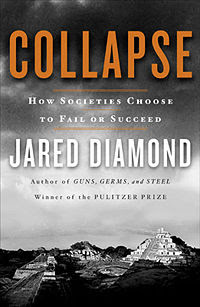 McGrath reveals a taxonomy of sorts of pessimists - "peak oilers", "back-to-the-land types", and generalized Cassandras, "doomers". My husband has been a "peak oiler" for decades and the Hubbert Peak was one of the themes of our household discussions. More recently we've both read lots of Jared Diamond. His book, "Collapse" gives a detailed backward look at how many societies have failed, and there are many uncomfortable parallels to be found with our own. There seems to be a fatal human tendency to ignore the long-term consequences of our actions. Since I see the universe in terms of thermodynamics, I have always had trouble with people who persist in believing in the free lunch.

My particular place in the taxonomy of "doomers" is the back-to-the-land type. I've been looking with horror for some years at our drawn-out food chain - how can we possibly be expecting a stable food supply from a distance of thousands of miles? Just as Voltaire cultivated his garden during the dying decades of the French monarchy, I am seeking to find a self-sustaining life to the extent possible. Thus the support for local enterprise, local farming, and thus I grow and preserve as much of our own food as I can. Food security is the most basic human need and it is not a given. We should be worried. I am. More on that later.

Part of being self-sustaining is learning a new way of eating and cooking. I've been learning new ways to use my bountiful sauerkraut production. Here is a new recipe I just discovered. It is modified from one I found among my mother's files.

Winter Slaw with Apples and Sauerkraut

Marinate the onion briefly in the vinegar, then add the other chopped ingredients, then the sauerkraut. Mix and chill for a little while before serving.

Note: no salt needed - the kraut is slightly salty, as is the vinegar.
Adjust sugar and vinegar to taste.

This has a nice fresh flavor and is a very light dish.
Posted by Vivienne at 9:39 AM