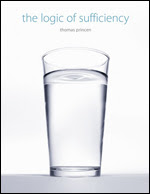 Thomas Princen's book, The Logic of Sufficiency, is not an easy read but contains plenty of food for thought about the socioeconomic principles by which we live and their effect on our planet and ourselves. (Yes, I'll get back to the garden at the end.) He points to the ascendance through the last century of the concept of "efficiency", which is used here as a catchall phrase for many terms and practices that characterize the "market" approach (my summary, not his).

He contrasts this with what he calls "sufficiency"; "the sense that, as one does more and more of an activity, there can be enough and there can be too much." I love the illustration on the cover - the glass not half full or half empty, but full. And yet it is not running over.

The point is that "efficiency" is aimed at increasing yield or wealth for individuals or groups, which leads to more and more exploitation of resources, whether they are soil, water, trees, human effort, or the ability of the planet to absorb insults like pollution and global warming. But our planet is near its "biophysical" limits (see also "Spaceship Earth") and we need to adopt approaches that are sustainable on a system-wide level.

This is beginning to sound like an environmental text, but it is not, though he does refer to environmental concerns and endorses "ecological rationality". It is really more of an essay on economics and how assumptions and beliefs about economic mechanics have brought us to where we are, at the brink of a catastrophic tumble (again, my words, not his). One of the frustrating things about reading the book is that he teaches by long example, such as the story of Pacific Lumber (long-term management of old-growth redwoods) and a lobster fishery (deliberate restraints on fishing to maintain stocks). There is no list of bullet points for a quick take-home message; it requires really studying all the examples and what they mean about behavior that incorporates frugality, moderation, a sense of limits, and allowing respite (his term) for people, animals, and natural systems. (Note that "resources" is actually an efficiency-type term.) A great windup is where he shows that "efficiency" is to blame for mad-cow disease. He also mentions (in a book published in 2005) that we have been turned into "consumers" and driven into debt in order to support a society built on efficiency.

Since Princen doesn't supply sound-bites for his thesis, I won't try to either. It does have strong echoes of Garrett Hardin's Tragedy of the Commons. I heard Hardin speak in the 1970s and his favorite story was about the common pasture where 10 cattle could graze without harming the capacity of the pasture to renew itself. If 10 farmers graze 10 cattle, all goes well. But one of them decides that he wants more, so puts an additional animal onto the commons. It suffers just a little but then the others see that someone is getting more than they are, so they put additional cattle on too. Soon the pasture system collapses and can't maintain any cattle at all. That is where the market ideology (aka efficiency) has nearly brought us today.

Yes, I'm postulating that our entire planet is like that pasture - or like a garden. If we can learn to take only from it what is sufficient, while we continually build up the soil and understand the complexity of the plants, animals, and physical environment that make it up, our garden can support us for a long time. We should cultivate it wisely.

I found your blog for the first time today and I wanted to let you know that it's been a pleasure catching up on your posts and book reviews. It's a pleasure to hear you think out loud. Looking forward to more!

Thanks, Daniel - I was happy to look at your blog with this introduction and it keys right in to my next topic.